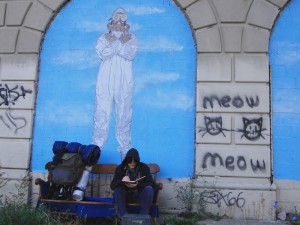 I put off posting about David for a few days because frankly, I’m not quite sure what to say about him. Not because he is some enigma like Joshua, but because he’s such a large — in the sense of generous — person.

I first worked with him on the short film, Arc of a Bird, which had a seed of inspiration for Cass. At the time, he was rolling off of filming Dark Knight and had spent time with Heath Ledger as one of Joker’s gang. (I remember quite vividly, after we filmed Arc, watching his 70 foot close-up on the Omnimax screen.)

When he came on set there was no swagger about having just come from working with “Chris” (i.e. Nolan). If he was less impressed with our meager short film budget and set up, he never showed a hint of condescension. If asked, he might share a story about the set or his fellow actors, but he was focused on Right Now, trying to figure out the part of Joshua. He clearly enjoys is the give-and-take with other actors. He’ll often respond to someone else’s line read with: “Yeah, yeah. That’s great. And then I say…”

On the way to set Tuesday, I remarked on the enormous water bottle he was carrying that had barely a half cup of water left. “Did you drink all that this morning?” I asked. “Oh, man. It’s CRAZY. My pee is like orange juice right now. I’m DEFINITELY drinking as much water as I can today.”

We were moving from one location to another and spotted a couch/bench sitting in front of a series of murals. (We did not set this shot up.) We discussed getting a shot of Joshua sketching there and I begin casting about for a piece of cardboard for him to sit on, rather than the damp who-knows-where-this-has-been blue covering. “Don’t worry about it,” he said and before we even had time to put down sticks and set up camera he was ON the couch, sketching a plant. Just like Joshua.