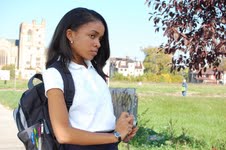 When we talk about an actor’s performance in a film, we usually think about “believability”. People can say someone “nailed” a role or “embodied” a particular character. But the notion of “performance” also means they’re involved with other players, with other members of the cast and crew. Imagine a group of five players and asking just one of them to change a detail — and at the same time, asking the other four to do just what they did, step into the scene or look a particular way, again.

In the case of Rachel Hilson, playing the lead role of Cass, we have someone who has the professionalism of actresses twice her age. On the fourth or fifth take, as you work with another actor on their blocking or delivery of a line, Rachel hits her marks and delivers her lines in a way that is smart and consistent.

Oh yeah. And then there’s the believability part. Yesterday, filming a scene in a shelter at a bus stop, she was asked to deliver a line that will probably be featured as voice-over to a still photography from a memory. After telling a brief story, her character in flashback is about to be assaulted and Rachel was asked to deliver the line “STOP!” forcefully, as if she was being attacked. Just that one word.

When we were done with the fourth take, the sound guy turned to me and said: “I had tears in my eyes on that one.” I had too.