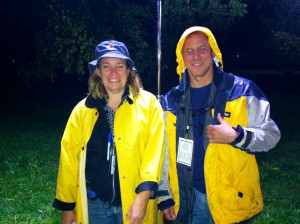 Thursday night/Friday morning marked the first night shoot of the production. Call time was 7 PM and we went until 6 this morning.

Of course, even after the martini shot (another term we movie-folk use for the final shot set-up of the day), while others are breaking down the set, packing the equipment vans or driving the actors (and the director) back to the hotel, these two jamokes — the producers — are still working.

Stacey Evenson (on the left) and Charles Cirgenski (you figure it out) are the reasons we’re standing on Woodward Avenue at 4 in the morning as the 834th car with a bad muffler pulls up and yells “HEY! Can I be in your movie?!” (Thinking back on the various Hollywood stories I’ve heard about actresses being discovered at a soda fountain or waiting tables in a diner — I never heard of ANYone being discovered after they pulled up in their 2002 Saturn, rolled the window down and shouted at the top of their lungs. But heaven knows, many, many try everyday.)

Stacey and Charles have done the reams of SAG paperwork and negotiated with people over locations. They meet each day to find out what items are over (and we keep hoping: under) budget. They’ve even listened to crew complaints when the director insists on shooting in a different sequence to get key lines in earlier. (Hey! in my defense, the Tigers have been in the playoffs and Lions played Monday Night Football — after three o’clock the skies are filled with helicopters, blimps, and light aircraft dragging huge banners for “Hustler’s Club” (which I thought an odd ad to fly over a stadium full of families — ‘Mommy, look! What’s a Hust-lers Club?”))

The logistics and planning and financial side of this business is in many significant ways as arcane as that of the Sound or Lighting or Camera departments. But these two people (and the office of folks who work with them (more on Nicole, Shannon, Sareta and Roshando later) are the reason we’re out in the a driving October drizzle in assorted colors of raingear trying to make some magic.