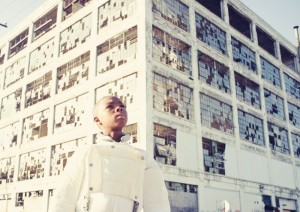 At the same time, however, an oft-quoted (though I’ll admit, unverified) fact is that in terms of sheer land mass – you could fit Manhattan, San Francisco, and Boston into the borders of Detroit.

How do we walk that line between showing the growth that is happening here, the hope you hear in people’s voices as they describe the latest project like Imagination Station?

Joshua, the artist in this film, quotes the first line of a Dylan Thomas poem:

The force that through the green fuse drives the flower

Drives my green age: that blasts the roots of trees

And I am dumb to tell the crooked rose

My youth is bent by the same wintry fever.

At our first tech meeting of the production, I talked with the crew about a six word question from one of James Baldwin’s essays that is serving as a mantra for this production. “What will happen to all this beauty.”

For each person on the crew, the goal is to extend, exalt, and more deeply express the beauty that is here – right now – waiting for us to notice.

We took some still photos as inspiration for the dream sequence of Franklin Jr., the 11-year old, imagining himself an astronaut. For me, this still shot of Craig Woodall captures that sense of Hope.