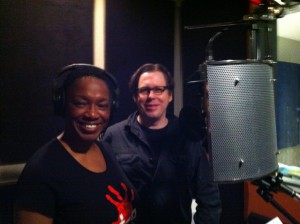 In the midst of this third version, we’ve had the pleasure of working again with Linda Boston and Loren Dean Harper at Steve Shultes’ Winding Road Recording & Post. (Can you spot Steve?)

Linda was in recording the voice-over for the montages of still photography of Franklin Jr.

Loren recorded the sermon of the preacher, featured on the radio as Franklin Sr. drives through Detroit.

With these two additional pieces, we’re on track to provide a sneak peek for cast and crew in May in Detroit (fingers-crossed.)

Keep checking back for further updates.